Got home from a long day of volunteering, had a quick chase with Yogi. (He was too busy eating to have much of a play.) And, he ended up at his favourite spot pretty quickly. I wandered over there said "Excuse me..." and he turned around to give me this shot. I think he's sad because Katt came to pick me up and he wasn't invited. 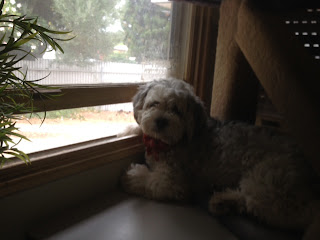 It's been a big day for such a little puppy so he had a big yawn. 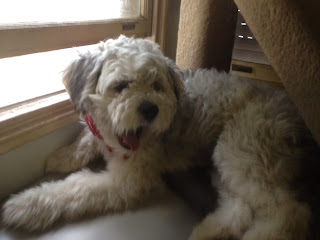 Yogi's fur is starting to get back to the shaggy state he was in when we first got him. He doesn't like being clipped very much though - especially around the face. It's understandable I wouldn't want someone coming near my eyes with clippers either.

If you've got any suggestions for photos or just anything to say please feel free to leave a comment. We're in the 2nd week now... and he's just as cute as he was on day 1!
Posted by 365 Days of Yogi at 4:57 PM