It's been a busy day. I woke up to a note saying Yogi was with Katt and she'd gone out to visit a friend. He was very happy when he got back, as he's a bit of a celeb when he's outside. I wonder if this blog has gone to his head.
Then I went out and when I got back Katt was gone and Yogi was in the backyard. He was most unimpressed. I remembered it was bin night so went to put them out, he stared at me through the fence and barked a bit. So, I thought I should get today's photos while it was still light.

I did. I'm torn between taking him down the dog park and collapsing in one spot for the night. I know what he'd prefer. Maybe I'll give the deciding vote to Katt - and if she decides against it she can be the guilt laden one. 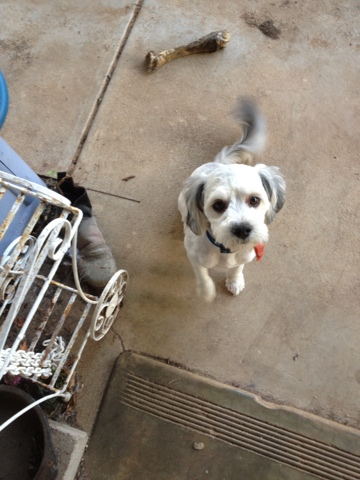 If I show you my impersonation of JAWS can I come in? Now, to go with his pirate hat I want to buy him a sharkfin to wear.