I decided this evening to take Yogi down to the dog park. Hoping that we wouldn't meet the same woman from before. Instead we met lots and lots of puppies who were wonderful. Hopefully we'll get to see them again. (Hi Gracie! I figure I have a 50/50 chance of spelling it right.)

We spent a good hour and a half down there. Yogi chased, and got chased a lot. I had one heart stopping moment on the way out when I thought Katt was going to kill me. Then I realised it was just mud on his paw. It was sad that I couldn't turn to Katt and say "Your dog." this time as she wasn't with me. So I had to run off to get the little doggie doo bags that they supply. Yogi ran off after me which was great. It meant he wasn't letting me leave without him. Next time I will think to grab them on the way in. 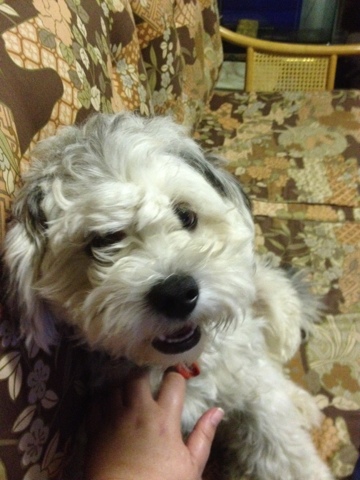 Yeah! Late night scratches!
(It was after 12. It counts.) 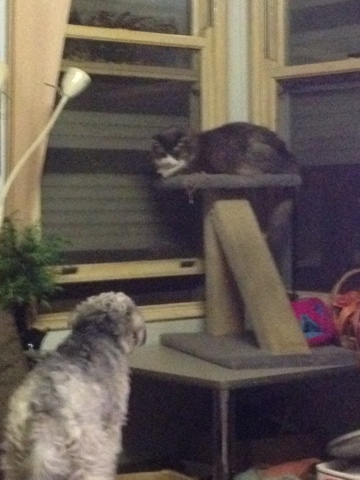 Captain, May I?
(I apoligise for the poor quality. It was late at night when I took it.
Yattie really didn't want Yogi up on 'his' table. He had swipinging on his mind.) 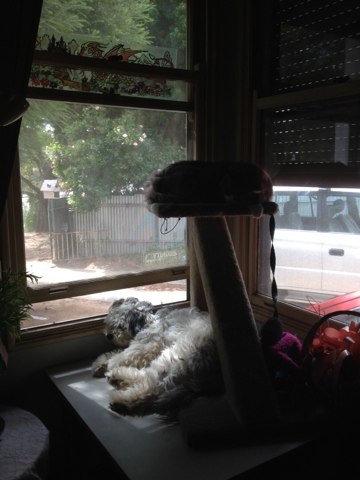 But when the Yattie's asleep, all bets are off.

So, yeah despite it being such a horrible start to the day it was such a great ending. I think we met about twelve dogs tonight. So, I know that's a good time to go down in the evening. It did get a bit cold though.

What really did my head in? When we got home... Yogi who had been running around nonstop for an hour and a half... wanted to run around more. I think I wound him up a little bit too much.

Just think one more day of Shaggy Yogi and then its clean shaven Yogi again. You won't believe he's the same dog.

I said to Katt yesterday, 'Did you groom his face?".
"No, he must have done it!"
I could actually see his beautiful eyes properly.