It's strange to think that in 300 days the main purpose of this blog will be over. I felt silly when I was about to ask a friend if we could delay our trip to Japan and China for just a couple of weeks so this project would be done. I saved myself embarrassment when she she said wanted to go about a month later. It's going to be strange when after a year I'm not posting a photo of Yogi every single day.

We decided we'd take him down to the dog park today after we chased up a dish washer part. We walked out of the repair place and I commented to Katt, "Gee, I don't know why he's working out the back and not out the front." He wasn't outright rude just abrasive and showed an extreme lack of customer service skills. It has nothing to do with Yogi - but he was in the car waiting for us.

Yogi likes to make sure we don't forget where the car is parked. So he barks. And barks. Shuts up for about 30 seconds and barks. It can be rather embarrassing when you've forgotten this lovely little habit and take him to the supermarket.

It was cold this morning so Yogi was curled up in a little ball. He was trying to dig a hole in the arm chair he's claimed as his and I had a flash back to many years ago. My family has always had dogs. Any time I am without one I don't feel whole as a person. We used to have a Kelpie called Kimbie. Kimbie was a tennis ball nut. You went out into the back yard and she was at your feet with the ball. The only way you could get back inside was throw the ball and while she was after it rush back inside. Then she'd come running up to the door and drop the ball as if to say 'You left! We were in the middle of playing ball and you LEFT!' It didn't matter if you'd been out there for a full two hours with her it still wasn't enough. Until she was older and then it just hurt that she didn't want to play with the ball anymore. We brought her home from the RSPCA and were told not to let her do anything strenuous. My friend and I were only about ten and rolling a ball back and forth on the floor. Kimbie jumped up and went for it, a true ball dog from the beginning. (Yes, she was named after a brand of nappies. What of it?)

But, this is Yogi's blog and you came here to see what he was up to today. Not listen to me reminisce of those who are waiting for my family at Rainbow Bridge. Okay, indulge me one more very quick Kimbie story. My brother and I were fighting over something trivial and one of us said to Kimbie go to who you love best. Do you know what she did? Sat right down in the middle of us and wouldn't move. I loved that dog, I miss her so much even now thirteen years after she passed.

Oh yes, the reason I brought up Kimbie. She used to dig herself little dirt holes and then curl up in them to keep herself warm. I thought Yogi might be doing the same thing and put a blanket down on the couch for him. Then I thought to myself this is going to be a great photographic moment! 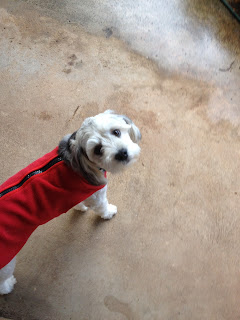 It's cold and wet out here. I'm not
staying out here! I want to pee inside! 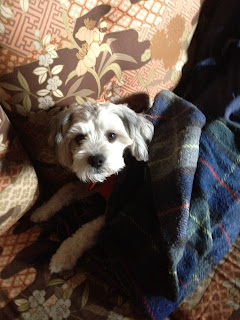 Aunty Anne, I got fur for a reason! 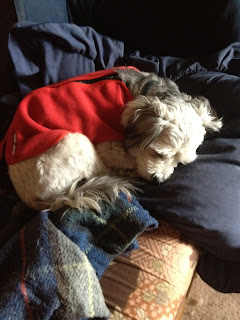 Just need a pillow to lay my schleepy
puppy head. So soft and smells like Mummy. 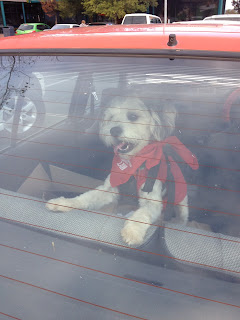 Over here! My peoples are coming!
My peoples! It's here! The car is HERE! 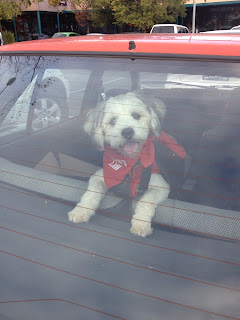 You found it! If it wasn't for me you
wouldn't ever find your car again!
You're lucky to have me. You know it!