I must apologise for the brief and fuzzy photos I've posted of late. I was volunteering at Ozcomiccon which meant long days. It was awesome though, and I look forward to doing the same next year.

Yogi's had a bit of a change in routine of late. Seeing Yattie has become much more tolerant (and we hope is onto the way towards accepting) of Yogi he's been sleeping in Katt's room. It was quite funny the first night. He stayed in with her and when I got up to go to the loo he jumped off her bed and ran into my room and jumped onto the bed.

The second night both doors were open (Katt's always is. Mine is only open when I'm toing and froing) and he came in from his just before bedtime pitstop. He looked at me and Katt as if to say "Um, which one do I go in? I don't know. Tell me!" and I'm laughing and going "Go to Mummy's. You sleep on Mum's bed now." but as I said it I took a step forward so he went "Oh! Okay!" and ran and jumped on my bed. He slept closer to me than he ever has I think that night.

Last night I put him out to the loo (Katt forgot one night and had a wet patch to thank her for it. LOL You can't blame her though. Yogi's late night pitstop is usually my responsibility. But not when I've gone to bed and decided it's hers.) and he came in saw my door was shut so ran straight to jump up on her bed. It's so cute when he comes in at night you can tell how tired he is by the way he turns. If he wants to stay up he'll run straight for the window. If he wants to go to bed it's straight for the bedrooms. 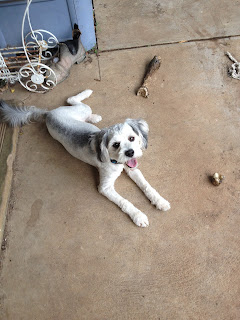 Hi! You can take photos today.
It's a good fur day.