Took Yogi down the dog park again today. So many puppies there on Sundays. It's great. Although, Yogi didn't do too much chasing. Someone had a dog in there that was too big for the small dogs, but they had a smaller dog with them. I don't think I'd want to take that little one into the the all dog park either.

There were some beautiful huge dogs next door. I swear one of them was part wolf. I'm a sucker for a husky or a malamute and there were a few in there. I wanted to run in and pat them all. The husky was all white apart from a few black spots on his ears. I want one. (Shh don't tell Yogi. Although, he's Katt's dog so I can get a husky if I wanna. Wow, I just got sidetracked on a 2 hour let's look at the adoptable dogs fest.) 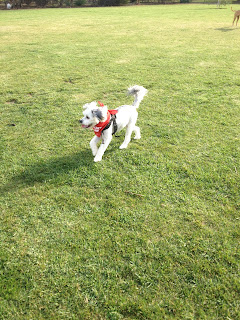 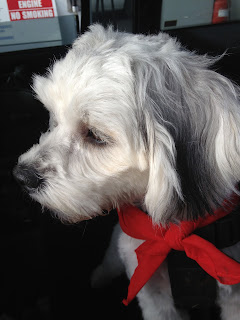 I got told not BARK while at the petrol station.
Sad Panda. (Mummy taught me how to say Panda!) 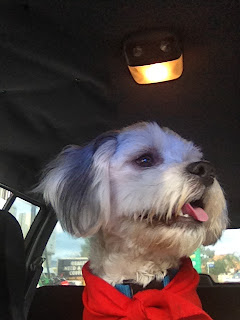 Mummy won't notice if I start barking.
She's in the shop. I gotta bark or she'll
lose the car again. Can't have that!
Friends of the Greyhound  is the site I was checking out. Mum and Dad's dog is getting on. She's 13 this year. Lyn suggested that they look into getting a retired greyhound when the time does come as they're happy to be couch potatoes as they've had their runs by racing. It's much much better to rescue a dog than to buy from a pet shop. We have to stop the puppy mills.