Just got back from the dog park. Met 2 failed guide dogs, and a cocker spaniel. So that was interesting. The damn mozzies though. We were saying tonight how we need solar powered lights with mozzie zapping capabilities. A bbq out the front. And, the doggie doo bags on the inside of the park instead of on the inside of the gate.

Yogi blitzed like crazy. But by the time I could even think about picking up the iphone was at the other end of the park and stopping. But boy was he teasing those puppies. It was so cute. It was nice to go there and have a good experience after the past couple of times.

So, he's been a very tired puppy today. As you can see he's happier sleeping with Katt, as he's allowed to sleep on the pillows in there. 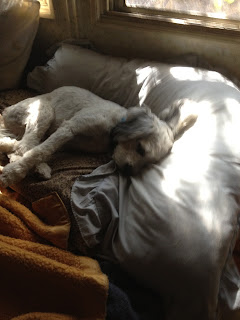