Yogi's probably full of beans today as we didn't take him down the park today. He also didn't get the bath we've been promising him for the past 3 days. Tomorrow.

I shall get some photos of the crazy puppy and probably some video afterwards as he'll blitz around the backyard.

But, I didn't get the photos until tonight and inside so they're too blurry to share really. Apart from this one. 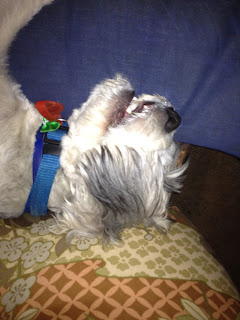 I love the way this photo looks like Yogi's got a book in his hands. He's been watching me read 'The Hunger Games' trilogy over the past couple of days. Great series. But, I've been laying pretty much in the same exact position Yogi's in with the book in my hands.

Yogi stayed in my room last night. But he's been sleeping in Katt's room most of the time. I think he just goes to bed with whoevers heading to bed first honestly. She lets him sleep on her pillows - I don't. So, I make a loo trip and come back. Yogi has pulled one of my pillows halfway down the bed (coz he knows he's not up the top end of it) and has settled on it quite happily. He wasn't as impressed when I told him that he wasn't allowed on my pillows and pulled them away from him.

He spread himself out over 3/4 of the bed horizontal wise to punish me. I stuffed that up by crawling over to the other side of the bed and went to sleep there. He wasn't impressed. I found it freaking hilarious.