Katt took Yogi down to the dog park with his cousin, Yoda today. He was so happy as weather has meant he hasn't been able to go for the past 4 days. I didn't get to go but I am assured he had a really good time.

He did the most hysterical thing this morning. We were playing a new version of "Got ya paws" where you count how many times you get to touch the others paws before they get you. Anyway, Yogi was standing up on his hind legs while I was standing just behind the couch so Katt could watch the action and play referee. (She didn't realise it as she was absorbed in whatever she was doing. But still, she was referee just in case Yogi cheated.) I tap both his paws once and cry out "One! Two!" then he pushed his snout at my hands which means we start again. Next thing I know - Yogi is sitting up on the top edge of the couch. He had somehow managed to balance himself enough to perch on the very top edge of the couch. I burst out with "What ARE you doing?" About 4 seconds laughter Katt bursts out laughing, and that set me off as well. I wish I'd been able to get a photo of that. 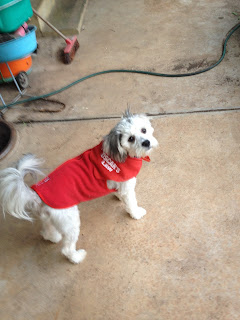 Do you think a mohawk would suit me? 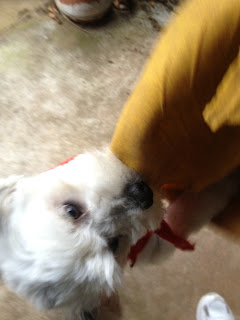