The weather was finally fine enough to take Yogi out to where he loves to be. He ran straight in, greeted a few people and went straight to the back fence near the gate for a poop. It's great that he does because it usually means that he's done and we don't need to worry about looking for it. It's annoying when he goes behind the bushes along the fence line because we'll spend 5 minutes trying to figure out where he actually went (despite our eyes never leaving the spot) and if he actually did. Like today. He pooped along the fence line and ran over to a bush along the side. I knew exactly where he'd squatted but no presents were left. I think he's doing it on purpose sometimes.

He was once again a ball thief stealing from the Shetland Collies. Although, one of them didn't mind as he was busy tapping Katt for more treats. He'd get up on his hind legs and just nudge her with his front paws as if to say "Hey, I'm still here." He stayed glued to her for about ten or fifteen minutes. They were beautiful. All 3 of them. The other two got their treats and wandered off. Not this one. He wanted more and he was persistent. (He did end up with more too. Such a cutie!)

A four month old Border Collie came in. He's probably just near the weight limit but he's so little. His grandma said that she'd been told not to take him to the all dog park as there are sometimes vicious ones in there. I stand by what I've said before. If your dog has a problem with other dogs - don't take it to a dog park where there will be several other dogs.

So yes, we went to the dog park and all had a good time. Yogi's got to learn to come when called though. He does about 25% of the time - as long as he's not too busy doing something more interesting. 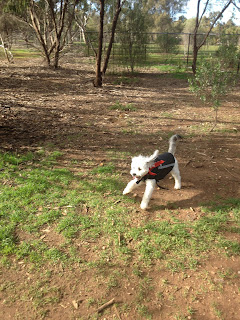 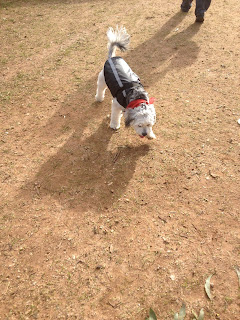 If I touch my shadows paw do I go
through to an alternate universe?
(This is what happens when you play D&D
around an impressionable puppy.)