Yogi's been a little crazy of late. He's not liking it when we have to go out and he has to stay home. Katt said he was crying when she got home. But, she won't let me get a greyhound to keep him company. Mind you, then if we went to the park we'd have to go into separate parks.

I was sitting down doing something on the WII and Yogi just walked onto my legs and stood there chewing on pengin. He then pinned my hand down by laying on it while he was chewing on pengin. It was pretty funny. What was funny because he saved himself was when he was being silly and almost fell off the lounge. He managed to sort of jump in the air (while falling. It was pretty impressive.) and reached out for my leg while I was reaching to stop him from going arse up. He managed to right himself and then jump around with the "That NEVER happened!" look. 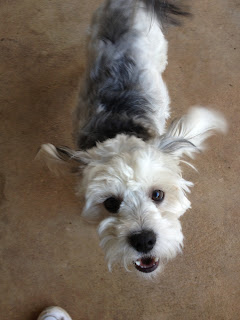 Do not tell them what I did last night
if you value your life Aunty Anne! 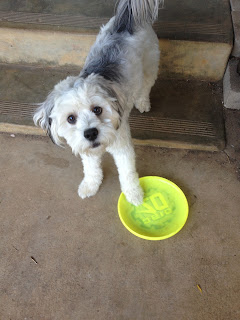 I'll give you my frisbee if you don't tell them
that I peed on Mummy's bed!

Oh yes, I did forget to mention that he peed on Katt's bed last night. He's now unimpressed with the itchy blankets and is trying to pull them off the bed coz he wants the doona he peed on back on the bed.