Woohoo. We made it. 100 days full of photos and stories of Yogi Da Cavachon. He's made us laugh, he's made me cry (I'll never get over him peeing on my bed.), he's made us scratch out heads trying to figure out what he's doing.

I just got home after being out for about an hour or a little bit more. He went absolutely CRAZY. I went into my room to put my bag down. He came racing up the passage dropped into his 'play' pose where the front is down and the back is up. I took one step towards him and he was off. He ran into the lounge room where I heard Katt laughing her head off. Two seconds later he was back with me. I ran into the bathroom and waited. He came running up and looked in... I jumped out and off he went back into the lounge. I then did my favourite trick. I ran into Katt's doorway. I heard him run back and poked my head out just a tad. He was standing peering into the bathroom trying to spot me. I jumped out and ran at him - he spun around and ran for the hills. I went back into the bathroom. He saw me and ran towards me I ran at him and he disappeared again. I thought to myself 'it won't work twice.'

I was almost doubled over trying to hold the laughter in as I saw him peering in the bathroom again. My favourite bit? He skedaddled into the kitchen at full pelt to run for the water. This went on for a good four or five minutes.

So, it's Day 100. His Day 100 surprise has gotten held up a little so instead of that I've decided you may have many photos. I think we'll have to do something special for the halfway mark though. We'll have to think about something special. I'll have to start planning for Day 365 too. It's not that far away now! 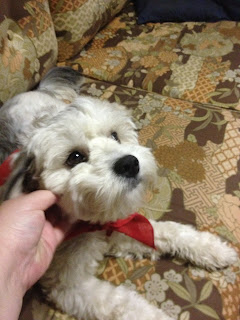 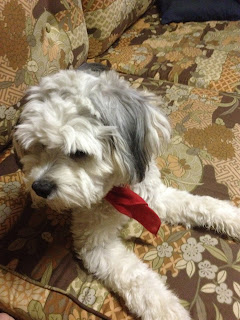 Now I drink out of a bowl made of gold 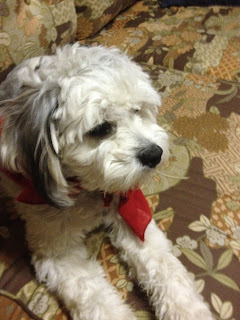 Well, if I think about it hard enough...
it might turn into gold. 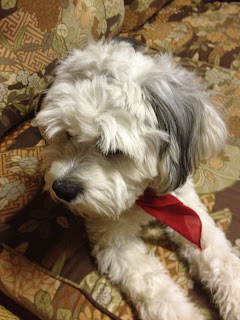 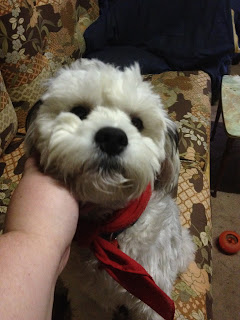 PS. Mummy thank you for taking me in. Like Uncle Pete and Aunty Michelle say they were meant to get me but you were meant to have me. Daddy knew you needed someone to look after you now that he and Snowy aren't here. I love you, Mummy.