Don't worry. We're not moving. We just moved the furniture in the lounge room around and my what a difference it's made. Yogi now has two arm chairs to jump up on. Oh, bugger. I'm going to have to find a mat for when he decides to dig for treasure in the arm chair he's in now.

But, we've moved the couch further over to the fish tank which means I've moved my desk further over out of the way of people and more centre to the tv. Cords are now running behind rather than across the lounge which I have always hated.

We had visitors today and Yogi came in to say hello. He refused to go out so I had to show how I was the boss. I cracked up when I heard Katt yell out 'Anne..." in this plaintive voice. (She'll disagree but she's not writing the blog I am so :P) and he disobeyed for a few seconds but when he realised they weren't going to save him he decided he'd finally listen to Mummy. It's better to do what Mummy wants than get Aunty Anne involved. She's not as wonderful as Mummy. She thinks pats and cuddles are just as good as treats.

Still, he's curled up now hoping that tomorrow will be a day of running and joy. Although, not if it the weather is going to be wet. Still, be a good day for baking. Katt made cookies tonight and they are scrumptious! 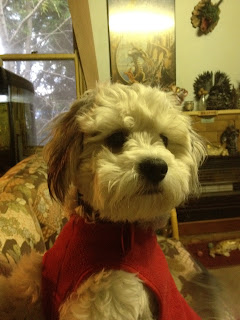 Mummy? Can I have one of those cookies?
Please? I promise I'll grark on command for you!