My friend came to visit today but she doesn't like dogs so she's not patting Yogi at all. He was so excited when she came in the door but she told him to get down. He climbed up on my lap and assumed he'd be able to walk over to hers.

He's now curled up on the couch next to her sad that Aunty Kitty won't give her cuddles. But, content to just be close to her if he can't get pats. He even tried giving her Rabbit/Bunny but she wouldn't have a bar of it. It was pretty funny though.

Katt and I did some running around this morning with Yogi in the car. He wasn't too impressed when we left him in the car to go into the supermarket. When we left he was barking and when we got back he was barking. Been raining most of the day, not conducive for dog park visits. 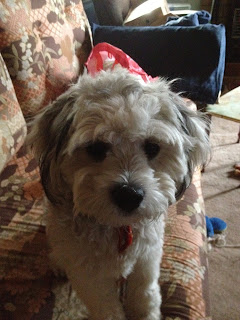