This Doggie In the Window Is Not For Sale (Day 108)


Yogi's had a quiet day sitting up at the window. Well, apart from when he was crawling up on me and chewing on Pengin. Or standing up on two legs on the couch to look over it and yell out "HELLO MUMMY!"

It's quite funny the way sometimes when she answers him he'll yell out "I'm COMING!!" and run over hoping for treats. He had to point out to Katt yesterday on the way home from the park that I just translate for him when she said it was me saying whatever he told her she was wrong about. I just put his doggie words into human English. It's pretty easy most of the time it's "When are we going to the park?" "When am I getting treats?" "PENGIN!!!"
As per usual of late he sees the camera and hides his beautiful eyes. 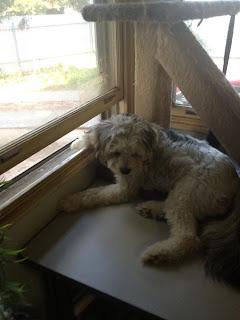 Mummy went out without me yet again. 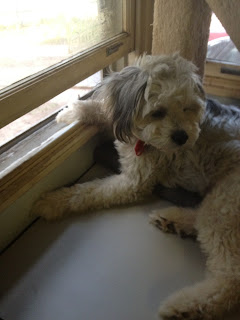 That means... the treat drawer is unguarded!