Yogi was digging up the couch. I told him to stop. Katt told him to stop. He kept digging. I walked over to the couch sat on it and pulled him into my lap. He was startled at first but quickly went Oh Aunty Anne's lap is warm and comfy. I go schleepys here. So he did.

He was in time out again today. He was barking his head off at the window so I made him sit on the couch. He was not impressed. He tried to break out twice but I caught him and made him get back up on the couch. The amusing part was that when I did tell him it was okay he wasn't sure if he was allowed to or not. But that all happened before the cuddles so all is forgiven.

I made him come and lay down in my room for with me as he was heading straight to Katt who's having a nap. He likes to go in there and say "HELLO MUMMY!" which is cute and all but when you're not feeling well it's not always all that appreciated. He's been with me for about 45 mins and now I let him out of the bedroom so I can finish this... where does he go? Straight to her... hopefully just to curl up on the bed and not wake her. 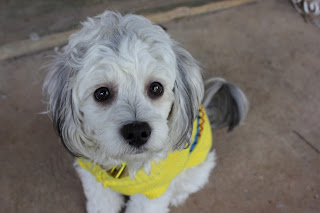 Look into my eyes... you are feeling very schleepy. 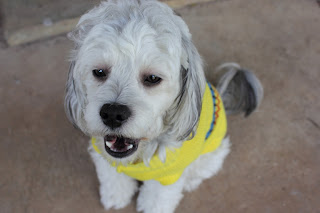