We've had pretty bad, stormy weather here lately, and last nights' effort actually 'broke' the side fence.  I'd taken Yogi outside earlier this morning..he made a bee-line for the hole in the fence..but came straight to me when I called him to come back.

Several hours later, Yogi decides he needs to answer the Call of  Nature. I was so engrossed in getting ready to go see Auntie Anne, I totally FORGOT about the fence!  Not until I was ready to go, and went to the door to let him back in that I remembered!

Needless to say..he'd 'done a runner'!!  As I live on a main road I was petrified he would be "harmed". (The silly little Cavachon has NO 'road-sense'!)  I immediately rang Auntie Anne to let her know..she got in her car and came straight away.  While she was on her way here, I spotted Yogi maybe 20 houses up the road.  I tried to run after him, calling him all the time..but he was either too busy on his 'adventure', or he just didn't hear me because of the traffic and distance I was from him! (I'd really love to believe it was the latter)

While I was watching I saw Yogi spot our postman coming, but he was riding his motor-bike on the road....Yogi almost made me faint, by first getting freaked out by the bike when it 'swerved' from him, then he was running straight towards oncoming traffic!!  I nearly died on the spot!

Because he was still a fair distance ahead of me, I raced back home, got my car, and went after him!  Wouldn't you know it?  Auntie Anne & I both arrived at the vacant block he'd taken an interest in!  He looked at my car..(You could see the 'wheels turning'..) "hhhmmm  I think I know that car....Ohh yes it's OUR car..oh and there's Mummy !! Hello Mummy, I was off the see Auntie Anne, but now she is here, can I go for a Sleep-over with Auntie Anne?  Can I? PPPPLLZZZZ Can I, Huh?"
I got the leash on him, took him to Anne's car (which surprised him a bit, I think)..Anne took him home to her SECURE back yard..and will be there till the fence gets fixed (HOPEFULLY tomorrow, if the weather holds)

Now, after all this 'venting'...I'm afraid we only have the pictures Auntie Anne took for us today...seeing as Yogi is in the "Maximum-Security-Dog-House' for escaping ! 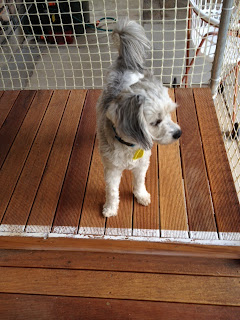 What do you mean 'that one's for me, Auntie Anne? 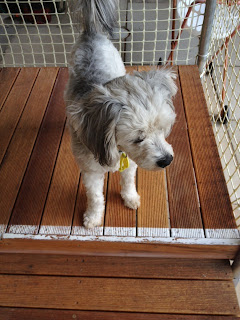 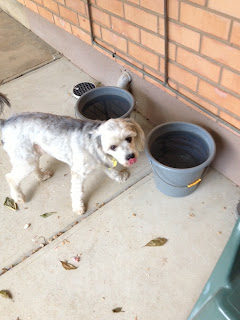 Auntie Anne, I don't think I should drink ALL of this water today...you might not let me sleep-over again if I keep waking you up all night...
Posted by Unknown at 11:09 PM