I finally have a few seconds to do more than just post from my phone with a quick photo I snapped. In fact today I took 4.

I'm watching Yogi at his favourite place on the table next to the cat scratch pole next to the window gazing out. He loves it up there - except when his Aunty Anne seems to get a bit annoyed when he refuses to stop barking. 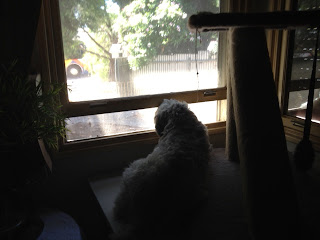 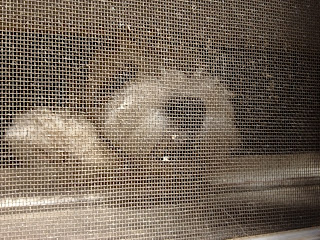 I went out the front to get a shot of him from the outside. He was actually really co-operative and even posed a bit.

He's not the most sedate little puppy. One of the traits of his breed is the 'Bichon Blitz'. We noticed something odd one day when he was in the back yard. He just ran off at full belt circling the backyard at about 10k-or probably even more an hour. One huge circle - and then he took off and did it again.

Katt looked it up and we discovered it's a trait of his breed. They blitz.

Yogi and I have started a traditon of playing chasey up and down the hall way. It has led to some of the funniest moments living in this house. Katt was in stitches the other day as Yogi and I were chasing each other around the pole. Don't worry it's not a pole dancing pole. It's a pole that's left over from when Katt knocked the kitchen wall down.

That's the hardest thing managing to grab video when he's doing something really funny. I need to invest in a gopro and then I could wear it on my head as I chase Yogi around.

If you've got any questions about Yogi or Cavashon's please leave a comment. I don't know much but I'm sure by the end of 365 days I will know a lot more.

Yogi's other favourite past time is watching television. It's hysterical he'll be walking past on his way to the window and stop for a few seconds to watch the tv. He was watching The view in this video.