It's been almost 3 weeks since I started this blog and Yogi's had just over 400 hits.
We're really enjoy showing you how cute he is. It's very tiring work being such a cute loving cavachon puppy. TAAADAAAA!!
Not only can I roll over (when *I* want to)
But I can chew on Mr Muffles at the same time! 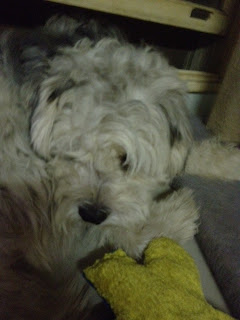 It's window time - not Muffles time. 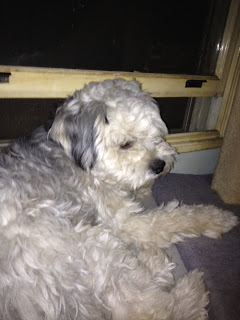 I'm sleepy and waiting for Mummy.
Get that camera outta my face!


Had another incident yesterday that had both Katt and I gasping for air. We were playing chasey - she was throwing pengin up the hallway and Yogi was chasing pengin while looking for me at the same time. I had the bathroom door ajar while I was standing back a little. I hear Katt call out "He's not sure..." So I opened the door and ran out crying "Boo!"

The look on his face as he jumped 4 feet in the air and ran as fast as he could back into the lounge room... There of course was the time when I jumped out of Katt's doorway and he got such a fright he turned himself around so quick he fell on his hip and slid a few cm. (Don't worry he was fine. If he was getting hurt by this game we'd be the first to stop. But he gets annoyed if we don't play it at least once a day. And hey, good excercise for me.)

I don't know that we're going to top running around the pole in circles though - that was classic.