Well, Yogi was a little bit unco-operative today. Far more interested in what Mummy was doing than paying even the tiniest bit of attention to Aunty Anne.

Mum's where the treats come from you see. Aunty Anne just keeps shoving her phone in his face, and playing 'Got ya paws!" Although, it was cute when he was playing it with me as well and putting his paws on mine in retalition to me doing it to him.

Wrestled with an app (annoyed though that I just paid for an app that does the exact same thing as the free one I had. I was hoping this one wouldn't require going through winzip. It does *sigh*. Although, the interface does seem better.)

Anyway, that's not why you're here. On with the photos!

I kinda cheated with the first one. I took it at 11.45 last night, but he was too cute not to share! He was schleepy puppy. Very shchleepy puppy waiting for bed time cuddled up on Katt's pillow on the lounge. 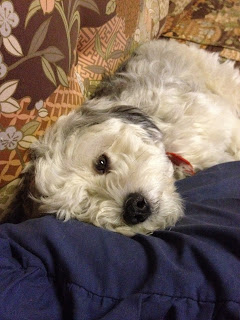 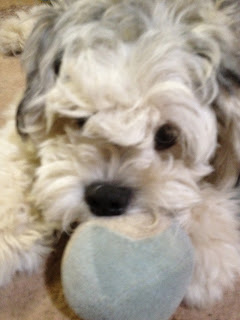 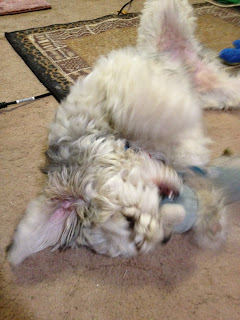 Oh, it's not over till I say so Pengin!