Well, that was a bit dicey. Blogger and I got into a bit of a fisticuffs but I think I finally sorted it out. I love it when I wake up in the morning and Katt's already awake. It means I can open my door Yogi will fly out and he's once again her responsibility.

I annoyed him last night. He was laying on my bed when I decided to play "Got ya paws!" He also hates his ears being petted unless he's tired. When he's tired he loves it. But, when he's not all shleepy puppy he doesn't want them touched. He does however absolutely adore having his chest scratched. I shall have to get a photo of the way he stretches his neck out so you'll get better access.

He's been inside for a few hours and wanted to go out. I thought I should go out with him and get today's blog out of the way as I probably won't have time later.

He ran *straight* to his yellow ball and dragged it over to his mattress. (Which he's decided has too much stuffing.) He earnt the nickname Sir Chews A Lot a while back because he just chews everything he can get his paws on. I'm taking my shoes life in my hands when I leave them under my desk. But apart from one incident with my knock off crocks it's been fine. (Personally I think he was just having a go at a fashion faux pas). 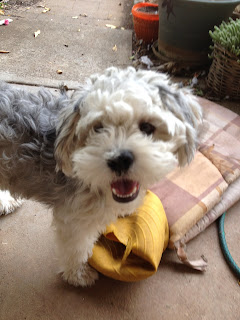 Whatcha doing Aunty Anne?
I got my ball! 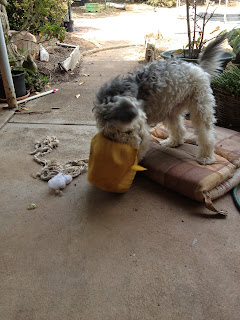 I swear I left it RIGHT HERE! 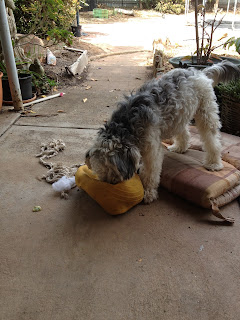 Maybe I just didn't stick my head in far enough. 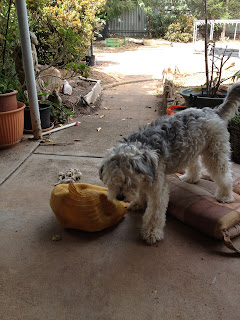 Hmm, maybe I moved it from this super
secret hiding space. To the OTHER one. 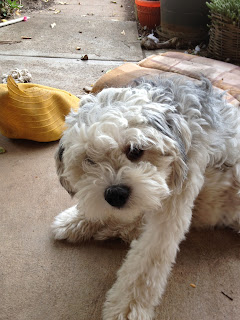 But first I'm gonna stop for a scratch.
Coz even if I'm itchy I'm cute!