I had to aww this morning when I woke up and walked past Katt's room. Yogi was on one side cuddled up to her and Yattie was on the other side. It was so cute. It's good that Yattie has finally decided despite his best efforts the dog is here to stay.

I did almost accidently start WWIII today though. I stopped playing with Yogi and started patting Yattie (who was on the bed next to him.) Yogi started creeping closer to Yattie and then backing away after almost giving a yip. He was a little bit jealous I think. I'd pat Yattie more but I'd like to keep my limbs.

So, Yogi saw I was up so I let him outside and played with him for a little bit. 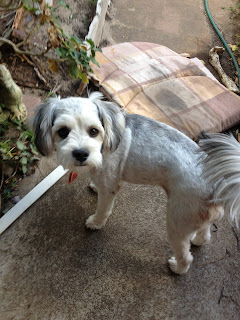 I  don't want them to see my tail.
It looks like I stole it from a grey squirrel. 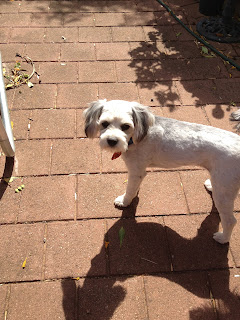 Does my shadow make me look fat? 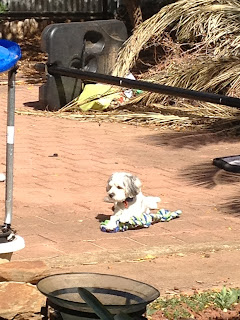 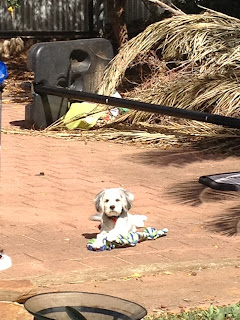 Don't think I haven't noticed your
30ft move, Aunty. You're going inside
without me aren't you? I know you are!


It was quite funny. I would take about a 1 metre step every time Yogi looked away and stop when he looked back at me. It was like we were playing a game of Captain May I? Or What's the time Mr Wolf? (Wow that takes me back. Haven't played those games in about 30 years.) At one stage he picked up his rope and moved about 2 metres so he'd still be able to see me. However, he didn't jump up and follow me just kept looking at me like that last photo as I walked in the door.

He's a bit sad. He hasn't been to the dog park for a few days. I think that woman really puts a bad taste in our mouths and makes us not want to go there in case she's got her vicious dog there again. The sign says "socialised dogs only". Weird thing was, one of the last times we were there I saw an old friend from high school who I hadn't seen in at least a decade. Last person I expected to run into.

I am really happy that Yogi loves the rope I bought him though. I should get a photo or video of him carrying it. It's too big for him but he thinks he's the size of a Great Dane so it's okay. A Great Dane was at the dog park the other day. Damn Scooby's a big dog!

I am pleased to announce 365 Days of Yogi Da Cavachon has a surprise coming. Shirls Wedding Supplies and Gifts. She's going to do something very special for Yogi on day 100 of the blog. It's scary to think that it's only 52 days away.

We're so close to hitting the 1000 mark. I was really happy to see that about half the people who visit this blog are returning visitors. It's great that other people are enjoying watching him grow. I hope that you'll all share Yogi's link with others so more people can share in the gorgeousness that is Yogi.