We gave Yogi a bath today. As always it was pretty damn funny when he got out and just blitzed all around the house trying to get the clean smell off of him. We put him out when he decided it was okay to relieve himself on the rug. (He tried it on the panther the other day too. Apart from those 2 accidents he's been really good.)

I love the way when you go to let him out the back now he'll jump up with two paws to push the screen door open and get out there himself. Every little look at the backdoor and I'm "Oh you want to go out?" and out he goes at the moment.

So, I was sitting at the outdoor setting just watching some Japanese videos on youtube. (I'm getting reaquainted with Downtown. They are making me laugh so hard I feel like I'm going to be sick. I love it.)

Anyway, Yogi blitzed past about 3 times - of course when I did get the camera ready he stopped doing it. But, I managed to get his attention and called him to jump up on my lap for a cuddle. Well,  he jumped alright - wasn't my lap he landed on though. 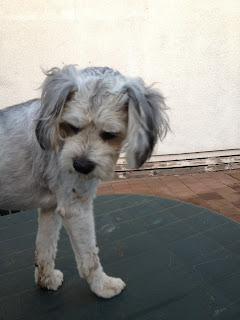 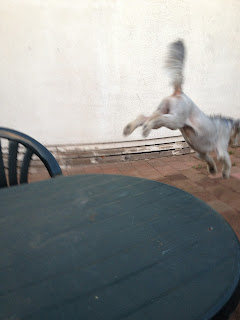 That's one giant leap for cavachonkind!

He leapt up there from the ground without using me as a launching pad. I was laughing too hard to tell him off though - because it was pretty damn funny. He has such a beautiful form when sitting or leaping off of tables.