Yogi was so happy last night because I took him for a bit of a drive with me. Just up to the servo and back but still. He didn't even bark from the car to remind me where it was. But, was he excited when I got back a couple of minutes later.

I was saying to him "Do you want to go for a drive?" And he looked up at me with those big brown eyes as if to say "You're not tricking? I can go.... I don't wanna get up if you're gonna go without me. You've got my leash! You've got my leash! I gonna bite it to show how happy I am that I can go!"

He's adorable. He's also scratching a lot. We know it's not fleas unless they're invisible. The Confortus really seems to have helped with that. Apparently there is someone in this area with a very bad infestation that isn't taking care of them. But, since he's been on the chewable tablet and been having a flea rinse we haven't had a problem. Just wish we knew what it was about so we could do something to combat it. Apparently he does have very sensitive skin so the slightest thing could set it off.

He was so excited to see me this morning. He wanted to run and play and Mummy was asleep. He almost rectified that three times although I did manage to distract him last minute. I can't get over how his GT Stripe is taking over his whole back and ceasing to be just a stripe. 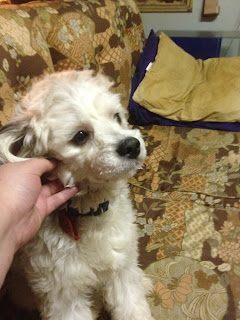 Just a little to the left. 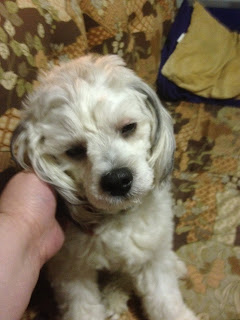 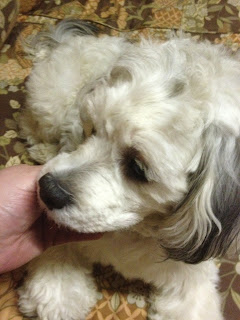 You know what would finish that off perfectly?
A treat.