Katt can't walk far because of her hips. Thus she's got a disability sticker for the car. We dropped into the shopping centre to grab some stuff for dinner. We left Yogi in the car while we went in. Bark. Bark. Bark. Bark. Bark.

We got back a few minutes later and he'd found his way into the front seat. (Not too easy when it's a small hatchback with only a little wriggle room.) He'd also been so kind as to say I don't want anyone to know my Mummy is disabled so he took the disability sticker (You know I say sticker but it's really more like a do not disturb thing you'd get in a hotel these days.) and somehow managed to put it between the hand brake and passenger chair. I'm just glad there was no one handing out tickets saying you have no right to park in the disabled car spot.

Apparently when I was out last night Yogi got put into time out 3 times. Katt never puts him in time out so you know he was being really naughty. She said he jumped when he realised she was standing right behind him and ordering him to get on the couch. That's what I do when he's going bunta at the window. I make him sit on the couch until I tell him it's okay he can wander off again. 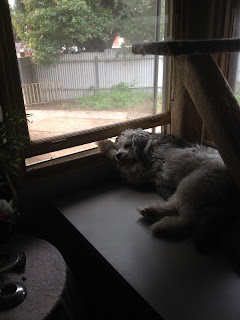 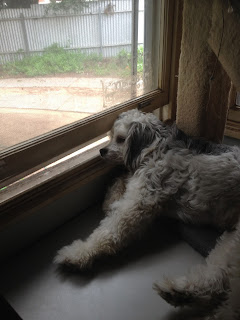 Even the cutest of us need down time.