I came home last night to find Mummy (aka Katt) had decided to make Yogi look extra cute for his fans. 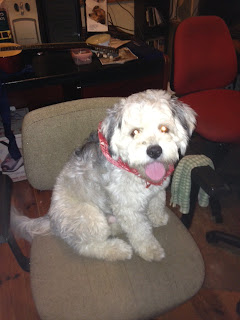 The first time I came home to find this a few months ago she told me how he'd come up to her carrying a bandana as if to say "Help me put this on please Mum." I got home and squeed all over him because I coudn't believe how much it suited him. I am not usually one for seeing dogs dressed up, but I have to admit Yogi carries accessories off very well. I will try and get a photo of him wearing his 'scarf' tomorrow.

In the above pic he actually looks like a chef who's just taking a bit of a break. He's got his tea towel on the side of the chair, bananda wrapped around his neck and he's having a bit of a pant because it's been such hard work.

It's been hot here 37c for most of the day. Happily Cavashons are purprose bred so that they don't shed - meaning that while his fur is thick as it grows back in hes' not as hot as he could be if he was another breed. I bet you on days like today he's thankful he's not a husky.

Aunty Anne was kind today and played chasey despite the sweat pouring off her. Oh, I must tell you of last nights chasey. I got home from volunteering for the Adelaide Fringe opening parade around midnight. Now, I will often go hide in the bathroom, or just inside Katt's room to mix it up a little for him.

It was dark in the bathroom so I hid a little bit further back than normal. Usually when I hear him coming I jump out and chase him down the hall. (He LOVES it... I get barked at if I stop chasing him before he's ready.) So, I see him look in the bathroom decide I'm not there so slowly creep up towards the entry to Katt's room to see if he could trick me. He twirl around as I jumped out, slid, got up, turned around to see where I was and high tailed it down the passage after turning and sliding once more. I was laughing my arse off as I chased after him.

The look on his face as he tried to sneak quietly up on me only to realise I was behind him. We will definitely have to get video of the whole thing sometime.

I tried to get him to play fetch with me just a few minutes ago. He was having nothing of it.


The bandana he's wearing is a Canteen bandana. I'd like to dedicate this entry to Kevin. He lost his battle with cancer in Sept 2010. A brave man who fought for a long time before he decided it was time to go home. He wasn't a teen but cancer took this man who was loved and is missed by many every day. I'm sure he's raising a beer and pissing himself laughing at Yogi's antics while he pats Snowy who joined him just a few months after his passing.