Despite Yogi's protestations and begging Katt didn't take him to the hospital for her check up. He told her that the doctor did indeed want to see him when she told him that he didn't. He was unimpressed when I told him that puppies who couldn't behave themselves were not allowed into hospitals. He informed us that he does behave himself. A stony stare when I pointed out barking and trying to pull Mum across the road in the middle of heavy traffic just to get at the guard dogs was not behaving himself.
Well that was unexpected. Katt's just gone off to the supermarket and Yogi just sat there watching her leave with his liquid brown cow (that poor blind cow) eyes. Usually he's prancing about crying "Don't forget me Mummy!" Tonight he was more or less saying "Sigh. I know you're going without me. I'm not going to bother expending the energy." Of course as soon as she was out the door he was up at the window and is now barking away. I just warned him one more time and he'll be on the couch and suddenly it's little quiet wuffles and growls. He's such a smart puppy.

And to think just a few minutes ago he was sleeping peacefully. He's now on the couch as he forgot what I told him. Cheeky boy went to jump back until I came out with my "Ah!" which always stops him in his tracks now because he knows if he doesn't listen I will get up and bring him back. I've only had to do that once and it seems to have stuck.
He's gotten so much better at letting Katt brush him too. He used to pull away as she'd brush his ears but now he just sits patiently and waits for her to finish. His bedfur this morning was pretty funny. I shall have to get a photo of that sometime. 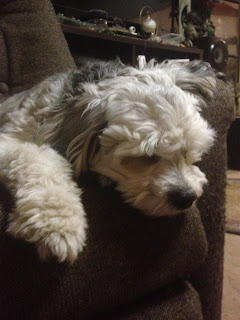 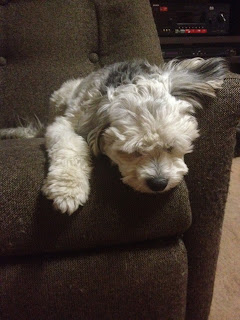 Got my fur all brushed for nothing.
Look how silky smooth my ears are!
I was going to be the life of the parky.