Yogi's been barking a lot today. We've got guard dogs over in the garden centre and boy do they like to talk. You can't shut them up. Yogi loves to answer them - only problem is he can't bark loud enough when Aunty Anne is telling him to be quiet and get on the couch. He'll start barking and then turn to look at me as if to say Umm is it okay that I'm barking my head off? Generally the answer is a big NO.

Thank you to Oskar and Sheba for the Sunshine award. What an honor that Yogi's recieved it twice now. One day Aunty Anne might get unslack and do the various bits that come along with getting the award. One day.

Been a quiet day around here. The weather isn't conducive to much. I don't know if he's even been outside since I let him out at 9 this morning. I should probably ask, mind you, he's gotten better at asking to go out himself. He lets himself out of the screen door now which is so cute. He's finally figured out the best place to push it to get the maximum time to get out. 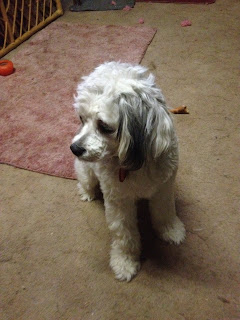 If I'm side on I don't look so FrooFroo 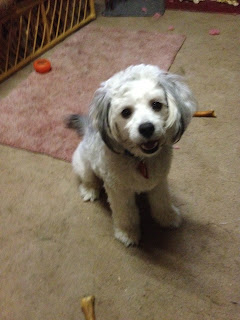 I want you to tell you Aunty Anne's
favourite joke. It's a funny one!
Two goldfish are in a tank. One turns
to the other and says you drive, I'll man
the guns!
Hahahaha. Isn't that a funny one?