Met up with Sarah this morning at 645 as per usual. (Okay, so it was 648 because I'm used to her running a couple of minutes late. Of course I start thinking I can rely on that and I hear her front door as I'm just in the middle of something and have to run out to meet her.) I came home and instead of working on my writing as I promised myself I would I started thinking about some of the videos of Yogi on YouTube.

I watched the one where he goes crazy after his bath - and of course you know how it is... You're meant to be doing something so everything else is much more interesting... I watched a bichon going crazy after her bath. I laughed my arse off when she was playing with her squeaky toy and Yogi came running into the lounge looking for the source of the squeak. So I backtracked the video to where Connie was barking. (There's actually a video on my channel of Yogi watching YouTube. Katt and I were finding it hysterical. Sadly, the video I took did not give justice to Yogi's interest. There's only so much you can get from the back of a dog's head.) He sat there his head tilting from side to side as if he was listening to what she was saying.

Anyway, I decided that he wanted to go out - and in the interest of putting off my writing a bit longer I followed him out there with the camera. Do you think he wanted to play? Hell no. He wanted to run around sniff for a bit and not do his business. He also wanted to not look at the camera if he could help it. However! I am nothing if not resourceful and today's actually a pretty good photo day!
I did have to laugh though. I let Yogi in and he ran back up to Katt's bedroom only to stop and sit in the door way. I went to see what was up - there was Yattie. Staring at him daring him to even think about getting around him. (Yattie's a 9kg cat. He's big. Yogi only weighs about 500gs more than him.) I was nice enough after I came back 3 mins later  - to see the situation had not changed in the slightest- to take a step into the room. Yattie decided that I outweighed him by a ton and moved. Yogi was so excited he almost jumped up onto the bed from the door way. He ran over to Katt and jumped on her. She muttered something after giving him a look and went back to sleep. I should have videoed it for you all! (I'm still living here coz I didn't LOL.)

Btw, I did end up writing. I remember when I used to struggle writing a 2000 word essay or story for uni. (I did creative writing.) I got a whole 2035 words done. Woot Woot! 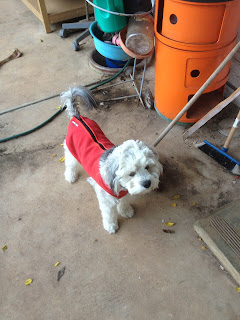 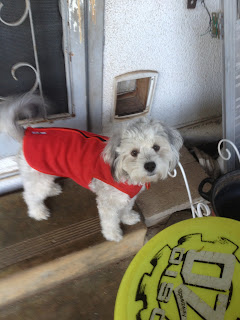 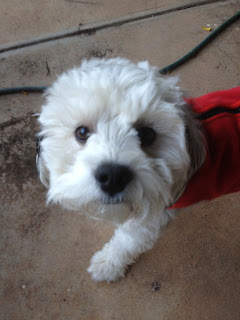 Do you really think I want to play?
At *THIS* hour?
Let me get back to bed with Mummy! 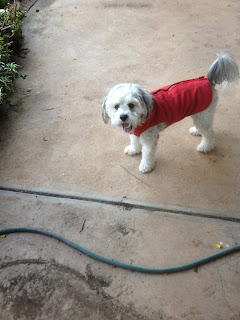 I'm sleepy. And you know, I can't
go with you watching! 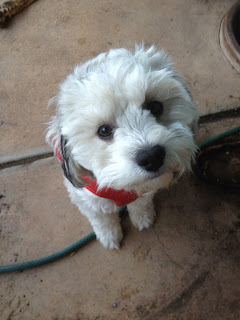 It's cold. Let me back to my warm bed!
I'll let Mummy share it, just like
Yattie Da Evil Cat lets me!