Katt misread her appointment time by 2 hours. So, instead of being inside and unable to get out for 2 hours like we thought - it was more along the lines of 4 hours Yogi was stuck in by himself. I don't think he actually went out between about 8am and when we got back at about 4.

After pointing out the hole he'd made in the fly screen I took Yogi out the back. Let me say I was impressed. He had really held it in. He must have a gigantic cast iron bladder. He pooped while he was peeing too. He'd been holding on that long. I've never seen a dog do that before. He was so determined to get back into Katt though.

Also, time to celebrate a little. We just hit 3000 hits on the blog today. Here's to 3000 more! Thank you so much to everyone who's been with us over the months we've been going. It's strange to think that in a few more weeks we'll be at the halfway mark.

Yogi's naked today as you can see, only wearing his collar. He decided it was time to take off his jacket and be a bit of a naturalist. A special treat today for reaching the 3000 mark is a video of Yogi showing off one of his favourite tricks. I'll enlist Katt's help soon and go through his repertoire. 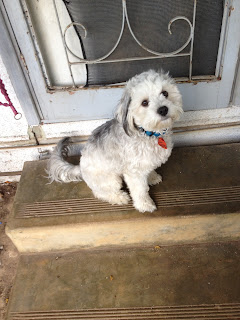