We got him down the petshop to be judged. The guy took a photo and now we sit back and wait for the call to come in proving what we already knew. Yogi IS the cutest dog.

I impressed a couple today. I looked at their dog, up at them and said "Is he a beagle husky?" "Yes, he is. You're the first person who's got that." So I was impressed. He was beautiful. Beagle colouring but husky eyes and energy.

Yogi also met a new friend today. Floyd came for a visit. He's a kelpie/border collie cross. Such a beautiful puppy. Yogi was not impressed that he wasn't allowed to show Floyd just who was the boss.

We were a bit worried that he wouldn't fit into his tux because he's grown a bit but it fitted like a glove. No one else we saw dressed their puppies up. The guy who took the photo was well impressed with him. 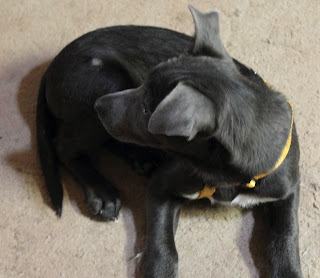 Dis is my friend Floyd. He's cute but he's not as cute
as me. No one is as cute as me. I hope the Petstock people remember that! 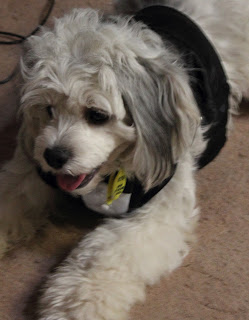 You look so scrumptious I gonna eat you all up....
Mummy.