Katt and I took Yogi down the dog park again today. That woman was there again. Katt told her in no uncertain terms what she thought of her. I still think if your dog is unable to play nice with others then you shouldn't bring it to the dog park UNLESS you are the only one there.

Still, we had a nice time. Yogi was hysterical. He had the place to himself for a bit over an hour. Every person/dog he saw he would run from one end to the other.

A huge Great Dane rocked up - and she was only 6 months old!

But, the classic of the day is when the woman and her friend rocked up with 2 labs and a big red dog. They were throwing the ball for the labs - Yogi was then chasing them. It was pretty funny. But then suddenly I hear them laughing their heads off and going "The little ones got the ball." as Yogi has taken off like a bat out of hell with 2 labs and a big red dog chasing him. Guess who had the ball in his mouth?

It was like something out of a Benny Hill show. The lab apparently came up clonked him on the head and he dropped the ball. I missed that bit. And then... it happened again. Yogi was so quick it was funny. It was a little scary when both the labs were on either side of him - but I think he figured out it was prudent to drop the ball. 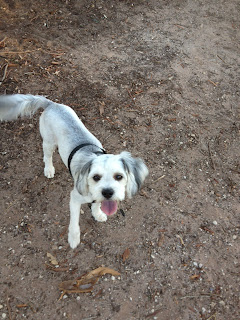 Hello all and welcome to my dog park 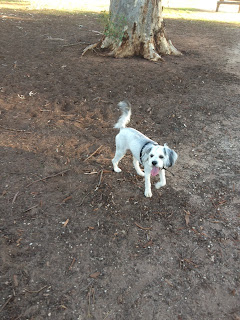 On the left we have the place where
Mum had to pick up after me.

I wish I had a camera that was up to scratch in low light. Yogi is freaking hysterical at night sometimes.