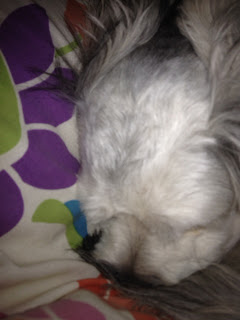 Yogi cuddled right into me last night. Apart from when he thought he could sneak onto the pillows - he was just getting himself more fully on them and comfortable when he woke me up. That's one thing I don't like - animals on the pillows. Up that end of the bed that's fine but not on my pillows. It's a personal thing. I know other people love animals on their pillows.

Took him down the dog park again this evening, (and yesterday. He's a spoilt puppy.)

We saw so many puppies today. Deigo, Pepe, Lucy amongst others. I stopped patting Lucy the Golden Retriever for just a moment and suddenly I was flashing back to when I was a kid and had a dog called Coffee. Mum refused to name the next one biscuits. I think it would have been hysterical yelling out "Coffee!! Biscuits!!"

Anyway, when you stopped patting Coffee and he wasn't ready for you to stop he would slip his head under your hand and sort of toss it with his snout so it would land on the back of his head for more scratches. Ruby did that today.

It's really nice down there. I've met some lovely people. I'm going to try and take Yogi down there more regularly. But, Jax, the Belgian Shepard. He was only there for about 10 mins and he wore the other dogs up. Yogi finally met someone he couldn't keep up with. It was funny watching all of them run around in circles trying to keep up with Jax.

Watching Jack try to keep up was so cute. He's a Maltese and watching him trying to keep up with the others was pretty funny. Also watching Jax jump over him was impressive. 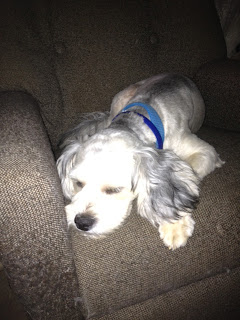 Poor Yogi, the flash was bugging him when he was trying to sleep.

It's been such a good day though. He loves it down with his friends. He was all blitzed out though at the end of the hour and a half we were there. Just don't tell Mummy that he's covered in mud again.