Yogi's developed a habit of taking a mouthful of food out of his bowl, and bringing it into the lounge to eat - I'm listening to him crunching away at the moment.

Today, Yogi's Mum and I were invited to my parents place for dinner. Yogi's welcome there most of the time but Dad just got out of rehab as he broke his leg in November. My advice? Don't break you're leg when you're 82 - it takes some time to recover.

Yogi's a little boisterous and loves everyone. He's calmed down a lot on the jumping but when he sees someone he particularly loves but hasn't seen in a while he can jump quite high. Not good when someone is on a walker.

This is the sight we came home to. 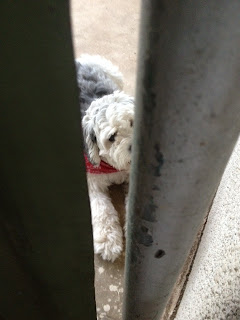 Mean humans leaving me outside!
He was so excited when we got home. He forgot he's not meant to be jumping - although a quick no usually does get him to calm down a tad. I've seen him reach Katt's shoulder height when he's really excited. Is there a doggie olympics? I think he'd give the high jumpers a good run for their money.
His fur is growing back in meaning that we can see less and less of his beautiful eyes every day. So, Katt will get them trimmed back a bit soon - something Yogi doesn't agree with. He wants to be seen as a miniture Old English Sheepdog. We wondered if that was what he was when he first arrived here. Then we saw him blitzing and realised no he's definately part Bichon. 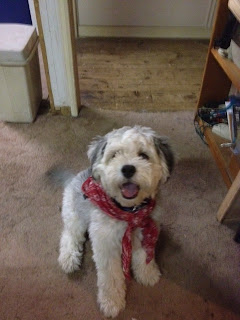 Yay! My humans are inside and so am I!
I was sitting at my computer before and Yogi trotted over to lay down next to me. He had his head on his toy as a pillow.
Oooh, he just got in trouble. Yogi likes to bark at the dogs and walkers by - but sometimes its those sharp barks that go on and on. So, he has time out on the lounge. It's so cute the way he will look at me with those beautiful brown eyes. Can I go back up there yet Aunty Anne?? Can I?? Can I?? Pleaaassseeee... and usually it will be a few minutes before the cycle starts again. He only goes into time out if he doesn't stop when he's told - and the little wuffles are fine. It's those sharp barks that pierce your ear drums. 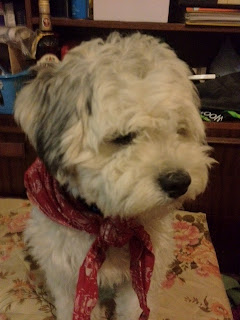 Now if I look sad it will get me forgiven sooner.
Usually he is the most beautiful loving puppy. We were going to take him down to the other dog park today but the weather turned a bit iffy. So tomorrow he'll get to see a whole new place and maybe meet a new bunch of dogs.
We need to get him into some training. He's impossible to walk on the leash at the moment which is a pity as I could walk him down there and Katt could come pick us up when we were done.
Just looking at his fur he's looking more and more like a muppet each day.
Stay tuned - some exciting (well for us) news is coming soon!
Posted by 365 Days of Yogi at 7:19 PM