Took Yogi to the dog park yesterday - no photos though.

I'm of the opinion if you have to stop someone who's coming in the gate if they're dog is male and desexed because your dog is rough - then you should be putting him on the leash as you see other people approaching until you establish that your dog is going to be okay. I'm also of the opinion if you see your dog rolling a smaller one and getting his jaws around the throat the response is not "Oh, is he playing too rough?" as the people with the smaller dog leave after only 5 mins.

That's not what a responsible dog owner does. So, Yogi while he did get to blitz as he ran away from the other dog (and did tease him a little) he didn't like being rolled onto his back and flipped into the submissive position.

But, after that we had one of the funniest moment's we've had with Yogi. I was looking at some Cavachon youtube vids trying to think of ways to better market the blog and videos. I started watching one of a dog watching something and barking her head off at it.

Yogi started to reply. Then I called him up onto my lap and played it again. This was the result.


That was pretty funny. He's never stepped off me to step closer to the computer before. I would love to know what he was thinking.

And, as for today's photos we have a few action shots. Although, it does look sort of like Yogi is learning to River Dance. 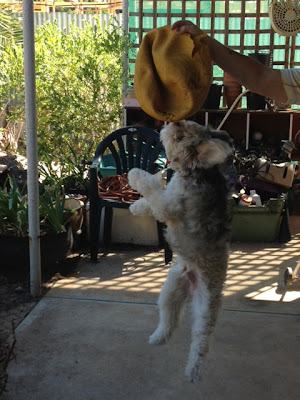 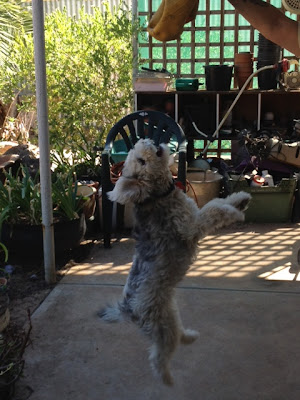 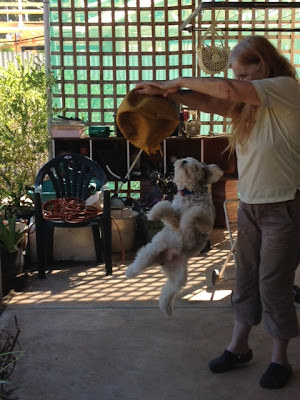 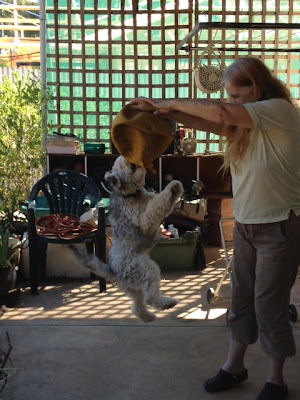 Many thanks to Yogi's Mum Aka Katt for assisting in this endeavour. It's a lot easier to operate the camera when you're not the one having to hold the ball up in the air and try and press the button on the phone at the exact right time. I'm actually pretty happy with these considering they're just done with an iPhone 4s.

Although, Yogi wasn't even trying today. I've seen him reach Katt's shoulder's when really excited. He's worn out and sleeping spread out by the window.