It was an unco-operative day again today. Not like yesterday. I think he's upset he's not gone to the park today. I thought it was going to be another day of "Blurry photo of Yogi" or "Even more blurry photo of Yogi." Happily, I did manage to get a couple of clear shots. 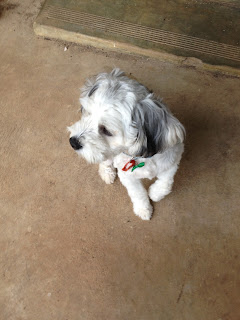 Wow, Mummy went out early today.
Lest we forget. There should be no war
only people loving on all cavachons. 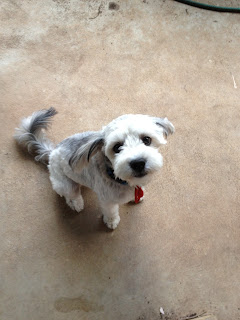 Hey what did you say? Grey is so a
normal cavachon colour! It is! It is! 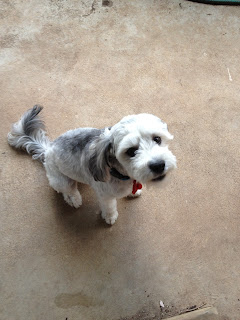 If you *must* know they took away my jacket
coz it looks like I might have peed on it when
I couldn't be bothered to lift my leg the other day.

There was the unmistakable smell of puppy pee in my car yesterday. After Katt's careful examination she claimed that there was no wet spot. So I made her take off his jacket, she said there were some wet spots but most likely from him being bowled over in the grass. Yogi is really starting to perfect the 360 degree very sharp turn. I think she thought I was imagining the smell but I maintain I was not because I didn't smell it in the car until after the dog park. Where he lifted his leg about a quarter inch and went meh and put it down on the ground while he continued to let himself go.

So, his jacket got a wash. I'm not sure where the Oscar's Law bandanna ended up but I think that's for special occasions and not for every day wear.

We've spent the past couple of days discussing Yogi's heritage and where his grey came from. His father, the king charles cavalier was white. His mother, the bichon frise was white. Yogi is grey. But, he is a tri colour. It's just a tri colour with different shades of grey. I'd love to find another grey cavachon for him to be friends with. Does anyone know of one?