I think if Yogi had his way he'd spend all his time between 3 places. The car, the dog park and Katt's pillows. I had to laugh this morning when I went past Katt's room and Yogi had turfed her off her pillows and pushed her over to the other side.There's no doubt who's the boss in that relationship ;) (Shh Katt thinks its her.)

We went down the dog park today for about 45 minutes. Yogi had a ball - he just wouldn't stop when he was told to stop. Seeing Katt had walked off to the bin with the lead. (Best thing about going to the park with someone else's dog... YOUR DOG! As he runs off for a poop. Although I was nice the other day and picked it up for her.) So, I had to pick him up. The scratches have faded but suffice to say he wasn't happy to be in my arms in a time out.

But, he did stop mounting the dog after that so he did learn his lesson. We've got to find a good obedience class for him. He would do sooo well at agility. And, he's very smart. I just love getting him to high 5. We need to work a little more on roll over but he's almost got it.
It was pretty funny on the way back, Katt realised just why Yogi was being so quiet. She wrenched her new $2 funnel away from him and told him he had enough toys at home to chew on. He pointed out he wasn't at home. But what made me laugh was when she went to put it down in the back again and realised just as she was about to let go what she was doing. Then I found a funnel flung at me sitting in the front seat. Maybe I should swap with Yogi! 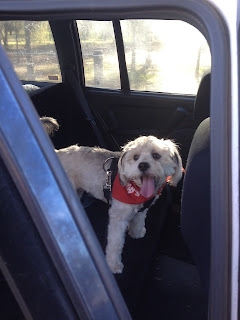 I could live in here so easily.
As long as you bring me my treats! 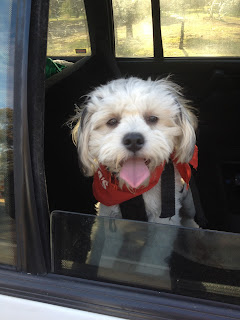 Actually, living in a car isn't all it's
cracked up to be. Maybe I should come back inside.