Yogi was a very happy boy today. We got home from an awesome workshop called "What's your story" the council was running. It was cool. Ever heard of such awesome shows as Cyber Girl or Ocean Girl? Annie Fox has written for a few others but those are the shows I enjoyed the most:D
She was running it.

We got home in such a good mood, and it was such a beautiful day we decided to go to the park. We got in the car and looked at the sky. When had blue turned to grey? Regardless we kept on keeping on. He had a marvellous time at the park. Kept stealing the ball from this gorgeous kelpie X. I miss my kelpie. They are one of the most wonderful breeds. (Such high energy needs though.)

We worked on heel today and while it's going to take a while he is definitely starting to get it. I just took him out to the back yard to try it again for a couple of minutes and he was doing quite well. It might be a better idea to try that out there rather than on the way back to the car from the park.

Oh last night was funny. We played chase Aunty Anne around the backyard. I ran and hid behind a bush. Yogi tricked me. Instead of going the most obvious way straight to me he ran down the middle of yard and then around the back of the bush. He wasn't running all that fast. He was more just looking at me with that "Are you nuts, Aunty Anne?" look. But then... then we came back inside. I was almost crying from laughing. He was blitzing from one side of the lounge to the other. The lounge isn't that big. So, he was going back and forth back and forth for a good three minutes over about a 5 metre space. The first minute and a half was without rabbit. The second half was with rabbit. The only times he stopped was when I grabbed rabbit and yelled out "I've got rabbit!" before I threw him so Yogi could blitz to get him again.

You may wonder why so much text today. Yogi was camera shy again. 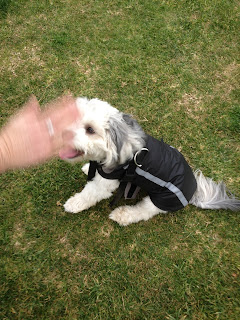 I not a basketball Mummy! 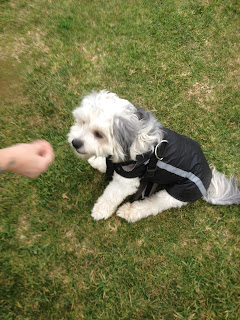 Well, okay I'll be a basketball if it'll
get me a treat. I'll do *anything* for a treat. 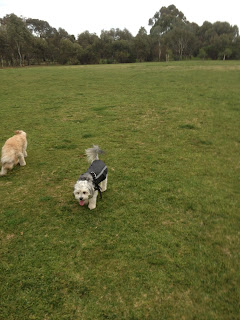 One small park for all doggiekind.
A gigantic park for really little dogs.
Seriously, sometimes I think it goes on forever.