Yogi has a very annoying habit of scratching up the armchair when he's about to curl up in it. I hate the sound of his claws on the fabric so I grabbed his bright pink rug and put it onto the chair. The next day I found it on the floor with one very pleased with himself cat sitting on it. I didn't have the heart to tell him you were meant to sit on the fluffy side.

After Yattie had vacated I picked it up and tucked it in nice and tight to the chair. Yogi scratches away and then settles down. Today he was going a little crazy. I looked over and he's got the rug in his mouth as he starts to pull it off the chair. I yelled out "Ah!" and he dropped it before looking over at me and jumping up on there to settle in. It was so funny it was like I could hear him muttering away at me. I just think the life of the armchair will be longer if a dog hasn't ripped through it.

We went to the park today but didn't stay too long as it got dark very quickly. So he was happy as he chased a lot of puppies around and around. 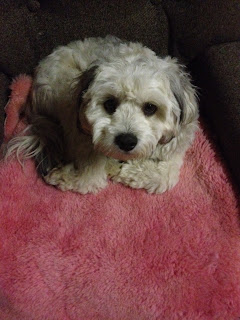 Don't think less of me coz it's pink! 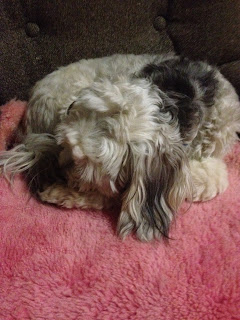 Aunty Anne won't let me rip it off. Hrmph! 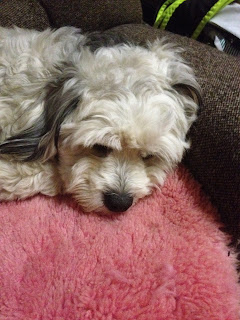 It is kinda soft and fluffy though.
And I am colour blind... maybe it's okay.