Katt keeps telling me off for saying Yogi looks froo froo and calling him Froo Froo Bear. He would have fitted in so well as Mozart's dog. Back when they were all wearing those powdered wigs all the time.

It was my parents 50th wedding anniversary today. 50 years. Many congratulations to them! I went out to lunch with my family and Katt had a major accomplishment today herself. She got Yattie Da Evil Cat into the cat box with Grumpi's help. Yattie hates the cat box... she was telling me how every time the vet left the room he was running back into the cat box at the vet. Well, I guess at the vet the catbox means home time.

She also told me that Yogi christened the floor in there as well. This time she was the one telling me about his yellow paw rather than denying that he would do such a thing;) Also, I am disappointed. I told her that next time she should get him a mohawk. She refused.

He's curled up quietly on his chair at the moment. That won't be the case when he realises Mummy AND Aunty Anne are heading off to a quiz night. Wish us luck! 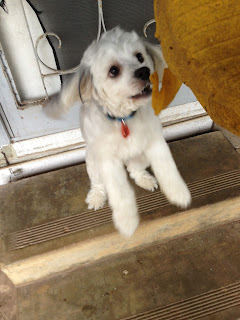 I teach you to call me FrooFroo Bally! 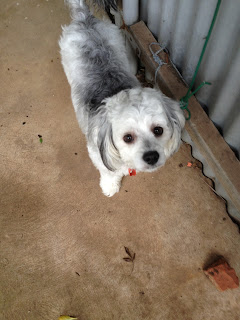 I.. not really FrooFroo am I?