He's been a schleepy boy today. He loves where the arm chair is now as he can keep an eye on both Katt and myself. No P.A.R.K today as we call it. The weather is still a bit iffy even though I don't think it did rain.

We were well pleased with Yogi this morning. I wanted to work on his training. And blow me down if he didn't roll over the first time I asked him too. Of course... when I was working on "dance" he was getting confused. He sat, high fived me, dropped and then rolled over and looked up for treats. It was so funny. It was like right, I'll go through everything I know coz it's got to be one of them.

We were so proud though. You would have thought a child had taken his first steps. Roll over has taken a bit of work. We've been watching Good Dog U dvds as well. Getting some good tips from them. I'm excited to watch the walking on the leash one. Yogi believes he's in charge there and is not impressed being leashed to a person who won't go as fast or where he wants to go. So, it will be good to get some tips and ideas. If we can get Yogi walking on a loose leash then I'd be happy to take him for walks now and then. Not only get him out to the dog park where he can run free to his heart's content... well within reason. 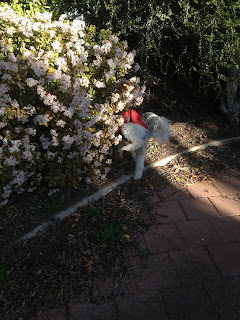 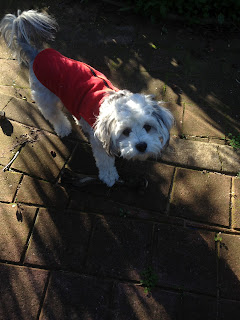 Aunty Anne... you know that photo?
The one you took of me peeing?
You won't put it on the blog will you?
It'd be embarassing. Especially if you shared
my peeing song. You wouldn't... would you? 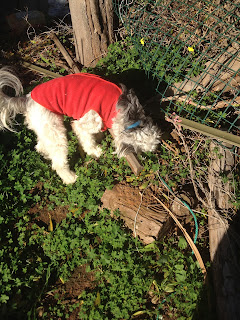 So *this* is how you get to Narnia!