We just got back from seeing 'Brave.' I have to say it is my favourite of all the Pixar movies. The animation was spectacular and the storyline was brilliant. I really enjoyed it.

Poor Yogi though. We got ready and were about to head out the door when Katt said don't forget your sunnies and I realised I had my glasses on. I ran back in to put my contacts in. (I prefer contacts to glasses most of the time.) Which meant we had to go to a later showing as we were cutting it fine as it was. I came back from putting my glasses on and Katt told me that Yogi had jumped up on his box and looked at her like "Where's my harness? I ready Mummy." Poor thing. Then we had the gall to go out without him!

Yogi's been amusing us lately. Every time there is a dog barking on tv he will stop what he's doing to walk over to in front of the tv look up and bark at it. Or growl. Occassionally grark which is a combining of the two. (Katt coined that phrase. Let's see if it takes off and spreads through english to become a part of it. It's funny to think that D'oh is now in the English dictionary when it wasn't until Homer Simpson came around.)

Yogi was being a horror head he didn't want his photo taken today. I don't know if I'm just more used to the FrooFroo or if his fur growing back in means he looks less FrooFroo. Will be time for another Yogi through the months posts soon. 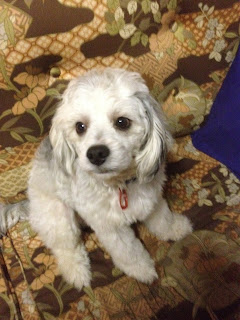 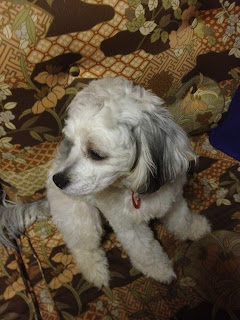 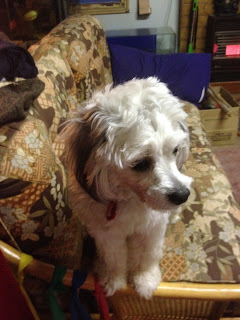 What? You only came back to get your keys?
What about me? How could you forget me?