Yogi and I were playing peek-a-boo this afternoon. He jumped up onto Katt's chair and was looking at me. So I ducked down behind it. Then I heard him scratching so I jumped back up and he stopped. So I started to lower myself down really slowly. Yogi was raising his head up little by little until he couldn't see me and started scratching again. He left marks on Katt's chair. Oops! I think he was trying to get up high enough so he could look down.

But, then Katt and I both cracked up laughing as he got smart and looked around the side of the chair. It was hysterical. He's such a beautiful boy. He's gotta go to the vet tonight though as it looks like something got into his eye:/

Katt showed me a photo yesterday and asked me who I thought it looked like. I SWEAR it was Yogi. Only, it was him with an Old English Sheepdog cut. Now I really really want her to get him a cut like that because it looks manly. Not like this FrooFroo cut he has now. But then if he had that cut he might get mistaken for that other dog! So perhaps it's better he sticks to FrooFroo. 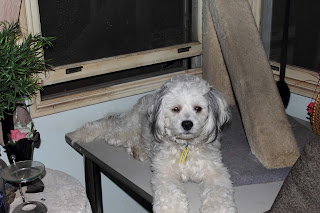 You'd be grumpy too if someone kept calling
you FrooFroo Bear!