Yogi was so happy when Uncle Harry suggested taking him to the park today. So off I went to the park with my brother and Yogi. He was running around happily enjoying himself. Trotting here and there. Getting to know the new puppies. Even had a bit of a play fest with Tricky which didn't last too long.
I kept getting knocked about by the little Italian Greyhound, Lola. She was sooo cute. She'd sprint and then dive between a human's legs for safety when she was feeling threatened. But damn you don't realise how much of a punch those pups can wallop.

Katt - Yogi is fine. You know what he's like when he's going 100 miles an hour and bam he goes down slides on his throat for a second and then rolls over twice before jumping back up and .... getting straight back into the chase. The only thing wrong (and I felt him over afterwards) was the green grass stain he now has on his leg. Aunty Lyn isn't coming this week so he might be sporting that for a while. He tried to do the whole "no one saw it so it didn't happen" thing - only problem was I think everyone in the park saw it.

He's so cute. I live in a granny flat here which is not self contained. I hate having to get up and walk up to the main house to go to the loo. But, the past couple of nights I've had an escort. It's so cute. He walks me up there and then waits for me to come back out so he can walk me 'home' again. Such a gentleman pup.

He's spent more time inside today with me than yesterday but I think that's coz he's exhausted. 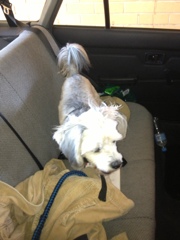 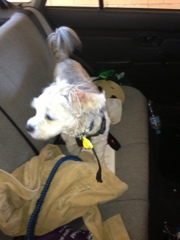 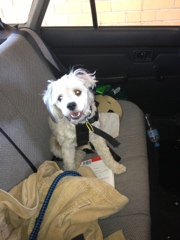 Your car is a mess! Clean it up! 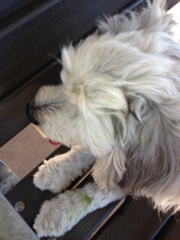 I am one tuckered out puppy.