So, Katt's off on her grand adventure. It's funny at his place Yogi wants to spend as much time inside as he can. Visiting me here he is inside for about 2 minutes and then wants to be outside. He's adjusted well this time though. Curled up asleep on the couch at the moment.

I was a little too enthusiastic with the ball thrower and whoops the ball ended up on the roof. Thankfully my brother had a couple of tennis balls so gave me one. Yogi was such a good boy last night and chewed up the ball thrower. So whenever I was trying to pick up the ball he was trying to chew the thrower. I have to say though watching Yogi with the tennis balls is one of the funniest things I've seen in a long time. He was grabbing it rolling on his back with it in his mouth and then using his paws to push it around. I honestly thought he was trying to teach himself to juggle. 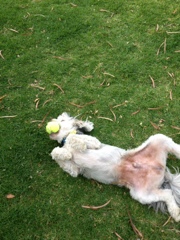 I not juggling, I doing Yogi Yoga! 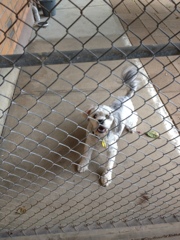 HI MUMMY! I miss you!
Send file in cake!