Just got back from seeing 'The Hunger Games'. I have to say that's the best book to movie adaptation I've seen. Mind you, seeing the author also had a hand in the screen play I'm not surprised.

Zorg, I mean Yogi, was left all alone as Katt joined me on a girls night out. It was great. Yogi was unimpressed - even more unimpressed because he's Zorg at the moment. I tried to get a photo but the lighting inside is terrible. So, I will grab one tomorrow morning when there is still daylight.

Anyway, I had an appointment which lead me to the supermarket afterwards which is near a petstore. I went and bought Yogi a new toy. We call this one "My god, that's a big rope." I'm sure it will get shortened soon. 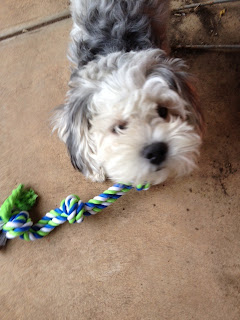 Why did you drag me out here?
I was warm and cuddled up with Sissy! 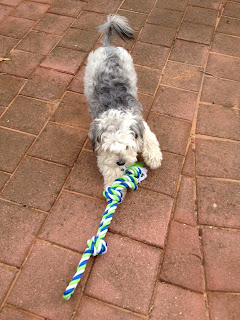 What's this thing that's as big as my head?
Is it a light saber? Or a sword? 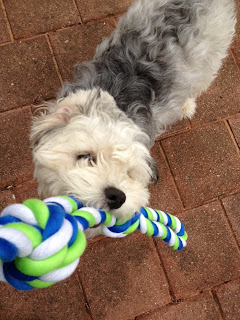 I challenge you to a duel!
En guarde!

Well, I did say I wanted to get him a pirate hat...