Cavachon's I've read are high maintenance and need to be bathed once a week. Yogi completely disagrees with this fact and says once every eleventy billion years is quite enough. He's tuckered out on his table by the window now.

He didn't mind his bath so much today though as he did get about eleventy billion treats. I am in the middle of teaching him shake paws. (I'm getting a complex at the way Katt repeats things I say with an incredulous tone. It was after she said "Shake PAWS?" that I realised it was meant to be shake hands. But this is what you get when you watch too much My Little Ponies. Although, they have hooves I know.) It's because I play "Got ya paws!" with Yogi and when he reaches out and paws or licks my hand I reply with a gasp of "You got MY paws!" 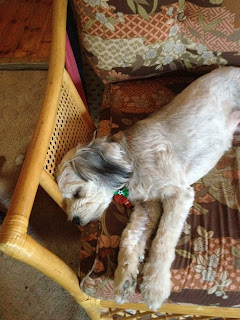 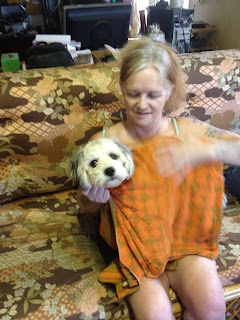 He ran around for a while like a nutter after we took this one. And then did a lot more of the same. It was hysterical he would stop and look at Katt. If she was laughing then he'd continue on - if not he'd stop and wait until she was looking at him laughing her head off.

This little guy is such a salve for the soul - when he's not being a horror head. (Katt is probably looking at me aghast as she reads this saying he's not a horrorhead. But, I ask where did I get the phrase horrorhead? It's not one I normally use on my own. I use ratbag.)

As always if you find him funny or cute please share him around. There are twitter and fb links just down there. Two clicks and you're done!

Would you like a post card from Yogi? Just email him at 365daysofyogi@gmail.com and we'll send one your way! (While supplies last of course.)