It's been the kind of day I enjoy but Yogi doesn't. It's grey outside - matches his coat!

But, it means no dog park. So that's 3 days since he's been. We're heading to the animal expo tomorrow. (sans Yogi. He will not be happy once he realises not only are his humans leaving him behind he'll be stading outside.) I'm interested to see what Dr Harry has to say.

Katt's been a fan of his for a long time so I hope I don't have to hold her back;) Any second now I'll hear "You're a bloody horror head." or something along those lines from behind me. I had to laugh yesterday when I heard her say "He is so a horrorhead.' But such a cute one!

Today with it being so dark and dreary it's been a bit difficult to get a good photo. I showed Katt a photo from one of the dogs blogs on Dogs With Blogs. I said to her that's how crisp I would love Yogi's photos to be. But until Canon decide to sponsor the blog by giving me a 5d or above I'll just have to muddle along with the iphone 4s. 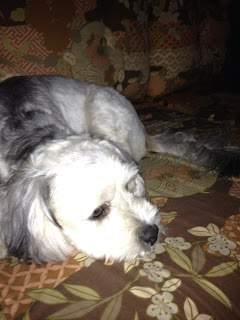 There wouldn't be a flash in my face if I was
at the dog park. Please Mummy? It's only a little rain!