We're starting on a more serious note today. I'm going to tell you about Oscar's Law. Katt and I went to the animal expo at the showgrounds today. I can't get over the size of the mastiffs. I must curb my wanting of a ferret though. I hate to think what Yogi would do if he had a ferret to play with. Ever since the rogue wizard I played had a ferret for a familiar.
There is a reason people ask you to buy from registered breeders and rescue places. Puppy mills are more than happy to keep supplying pet shops with dogs that are bred in squalor. Oscar's Law is attempting to change that. Please check out the site (after you've had a look at today's pics.)

Katt bought Yogi a present today. She was tempted to leave him inside while we were out, until she remembered what the little sneak had done. She did keep his toothbrushes in a bag on her desk. Yogi decided when Mum was out of the room that he'd help himself. It looks like he didn't get quite as many as she first thought as he was nice enough to leave one sitting on the desk. They're only allowed one a day for a reason. I told her she'd be cleaning up the mess. It is great though that Sir Chews A lot seems to have retired. The last thing he was caught chewing on that he shouldn't have been was my hair brush. Which the bugger had taken out of my bag! 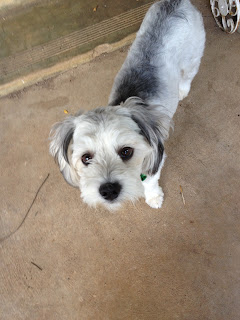 Why am I outside? I'm not an outside dog.
I'm an inside dog. Why do I keep finding myself out here? 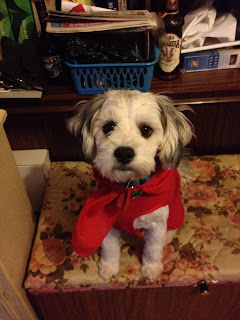 You went out with out me. WITHOUT ME!
How could you? Even if you did get me presents. 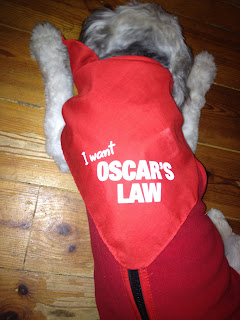 Thank you Mummy. It's my favouritest thing ever.
I got a jacket AND a new bandana.
No one will mistake this one for an ascot!

If you do want a puppy just remember that it will grow into a dog. It will have constant food bills and vet bills. It's not cheap but remember what you're getting in return. Unconditonal love. Even as they chew up your expensive shoes remember they're doing it with love. Buy from a registered breeder or a rescue shelter.