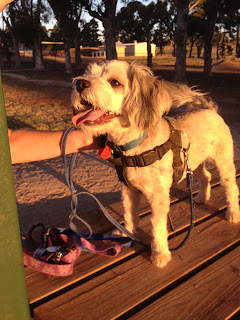 Yay! I'm at the dog park!
But, why am I still attached to my human?

Katt ended up carrying Yogi out of the dog park today.
Big dogs keep bowling him over. One dog kept going him - jaws around throat. Owner just quietly told dog to stop it - didn't grab it or put it on the leash. That's what we did with Yogi. He missed out on play time because the other dog kept pushing him over and biting at him.

A lab turned up. He seemed friendly enough until he started mounting Yogi while the other one was bowling him over. Katt ran over to pull Yogi out of the frey - and he fell out of his harness. The owner of the first dog then grabbed his and started trying to grab the lab. Katt picked up Yogi - who was trapped by the lab. She had a hard time picking him up as the lab had him in such a tight grip. She yelled "Help" to the other owners as the first owner finally managed to get the lab off him. She carried him over to the table and put his harness back on.

But seriously, if you're at a dog park and your dog starts having a go at another dog - don't just stand there. Do something. As soon as Yogi started with his mounting other dogs we grab him. He's quickly learnt that if he mounts someone (a habit he learnt at the dog park I must add) that he doesn't get to play. Oh, I wonder if he subscribes to that you don't tell your dog off, you don't punish them when they do something wrong training. That would explain a lot actually.

It's sad because now Katt only wants to take him to a dog park where dogs are segregated by size. Which is understandable. It's weird how if Yogi and I go with her he gets picked on. If it's just me and him it doesn't happen. I've met some really great people at our dog park and it'll be sad to not see them anymore. However, I guess we'll meet new people at the new dog park - seeing Katt said she'd make more of an effort to join us when I said I didn't want to drive so far on my own every day.
I think Yogi will be happy no matter where he is as long as he gets to run and play with other dogs. But, it is a bit of a worry when you see him go rolling 3 or 4 times as a big dog as bowled him over. I mean he's not  entirely free of blame - he will tease them into chasing him. Usually they can't keep up - this one could.

It's sad. Just puts me off going to the dog park at all. But I know how much Yogi loves it. And I love the socialising aspect as well. It's good for all of us. 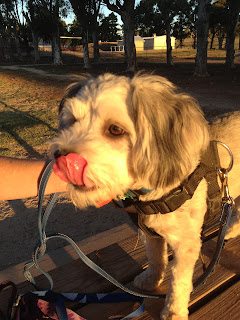